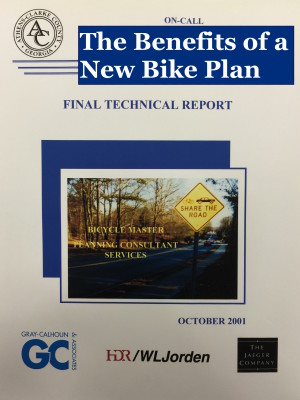 UPDATE: The Mayor has called and gathered a Bike & Pedestrian Master Plan Committee–the first meeting will be Aug. 22nd, 2016

In 1999, to some fanfare, Athens prepared to stripe the county’s first bike lanes (this almost 25 years after Athens first attempts at a comprehensive bikeway system).  Two years later, ACC approved a Bike Master Plan (BMP) with a 2020 planning horizon.  The BMP designated 16 routes that would create a web of connected bikeways.  At the dawn of the 2016, a review of BMP progress demonstrates it is time for a new plan: one that acknowledges the sea-change in bike planning, one that incorporates current, inclusive designs to promote and encourage safe use of our public streets, one that gives us true transportation choices. A new bike plan will bring many benefits, among them: advanced, best-practice designs; improved design-selection criteria; and low-cost solutions to quickly create a connected network of safe and comfortable bike routes.

Yes, the current BMP is old, but age is not necessarily a disqualification.  The 16 identified bike routes are ideal future corridors, and the map-level plan remains great aspirational goal.  A new BMP, however, is necessary to update the standards for designing successful bike project.  When the 2001 BMP was adopted, the main bike-infrastructure design guide was the 1999 American Association of State Highway Transportation Officials (AASHTO) Guide for the Development of Bicycles Facilities (PDF).  The recommendations found in the guide—wide outside lanes, discouragement of protected bike lanes, no use of green, high-vis markings—have since been superseded by the 2012 update of the AASHTO Guide (PDF).  Furthermore, in the past 15 years, new designs have become accepted and understood to increase the safety and accessibility of urban biking.  The Federal Highway Administration, for example, now endorses the North American City Transportation Officials Urban Bikeway Design Guide. The NACTO guide provides design guidance for the types of bike lanes that lead to measurable increases in the number of people biking, with a reduction in crashes.  Want to build a protected bike lane, bike boulevard, or a bike box? Look to NACTO.  Updating the BMP to reflect these advances in bike planning and design, will make it easier to bring these designs to Athens streets.

ACC’s own data reflects a need and desire for more inclusive bikeways that are designed for people worried about and/or uncomfortable riding in traffic. During the ’01 BMP process, 61% of respondents reported being “uncomfortable” on a shared street. Only 41% claimed to be “very comfortable” in a bike lanes.  New designs address these concerns. Protected bike lanes combine the comfort of a off-street path with the convenience of a bike lane.  Look at the two children using a protected bike lane in MA: 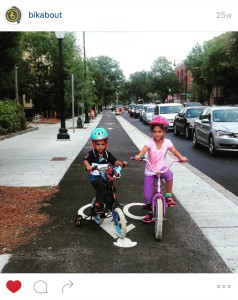 As standards for bike lane design have evolved in the past 15 years, so have the metrics used to select which type of bike facility to install on specific streets.  When the ’01 BMP set out to measure existing conditions, they used a formula called bike-Level of Service (BLOS). BLOS inputs various street conditions—lane width, traffic speeds, percentage of truck traffic— in attempt to quantify the comfort level of hypothetical cyclists.  The lower the number the formula generates, the more comfortable the street for someone on bike, in theory. The output is then converted to a grade: ‘A’ for the most comfortable, ‘F’ the least comfortable.  By changing the data to reflect potential improvements, we can see how adding bike lanes, or other designs would improve BLOS. This can help guide design selection, by identifying designs that provide the most BLOS improvement. But given it’s limitations, it is probably best that a new bike master simply disregard or de-emphasize BLOS (for a more detailed discussion of BLOS, look to the bottom of this post).

If we do not use BLOS, how do we choose the correct designs?  Luckily, there are much simpler methods for choosing bike improvements.  For example, look at this simple decision matrix. 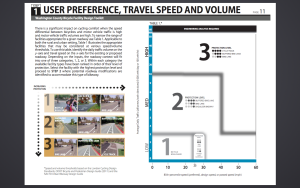 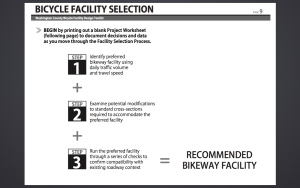 Instead of jamming a bunch of numbers into a spreadsheet, this design-selection guide is intuitive to understand—the more cars, the faster the cars—the more protection for people on bike. A similarly simplified selection criteria would make the next Athens bike plan more transparent and accessible. More importantly, such a plan would ensure installed-designs address real-world concerns rather than the output of the BLOS formula.

The 2001 BMP further presented improvement recommendations for all 16 routes, but because it was developed before the revolution in low-cost bike infrastructure designs, the recommendations relied heavily on major reconstruction. Faced with the extreme costs of widening multiple streets, the ’01 BMP often relied on signs and “sharrows.”  (Signs & Sharrows are not infrastructure and they may not improve the safety of the street.)  Cities around Georgia are making quick progress on their bike networks by searching for low-cost opportunities to add bike lanes within the existing right of way.  Athens needs a new BMP to look for these important, inexpensive opportunities.  We need a BMP, that will go bargain shopping, if you will. Creating more space within existing right of way keeps costs down; and it can also speed up the timetable for network completion. We’ve watched and waited for 15 years as the ’01 BMP make slow progress towards partial implementation.  We can do better.

Before the current plan expires, we must adopt a bicycle master plan that reflects the new reality of bike planning and design. To meet its mission “to provide an open and responsive government, facilitating a positive environment for individuals to obtain a high quality of life and local organizations to achieve success by providing innovative, quality services and responsible stewardship of the community’s resources, to benefit current and future generations,”  Athens-Clarke County should fund a bike master plan to provide innovative, quality bike infrastructure. With such a plan in place, we can move forward toward a safe, equitable, and efficient bike network that provides true transportation choices for all of us.

Ok, let’s dive deep into the challenges of relying solely on BLOS.

One final note—the ’01 BMP also revealed startling lack of low-stress streets in Athens, at least inside the study area.  Examining the 2001 BLOS data (which to BikeAthens knowledge has not been updated), further underscores the need for a new BMP to help Athens better create a network of safe, low-stress bikeways.  The ’01 BMP measured 125 street segments, on 54 streets.  107 had a BLOS of ‘D’ or lower.  Only 5 have a ‘B’ or higher.  Of the 26 segments making up the 16 official bike routes, 15 still have a BLOS of D or worse. Currently, only 6 of the street segments, at most, have a BLOS of ‘B.’  We say BLOS of ‘B,’ at best, because adding a bike lane is no guarantee of sharp BLOS improvement.  College Station’s first section of bike lane was included in the original analysis, and that segment received a ‘C.’

True, a low percentage of ‘A’ and ‘B’ BLOS roads may not matter, if those ‘A’ and ‘B’ roads were connected!  But when bike infrastructure is isolated, it dampens the impact of the existing infrastructure.  A bike lane that is interrupted or connects to a busy street does little to encourage people to use the bike lane. Athens bike network should have a central web of infrastructure that is very comfortable for a majority of users of all abilities.