News
You are here: Home1 / News2 / News3 / The Continuing Saga of Hickory Ext.

Hickory Extension, the street planned as a cut-through the former Selig Development (now known as “The Mark”), is closer to construction, and is on track to proceed with a street layout that does not accommodate bicycles. Complicating matters, the street is private with a public access easement, which means ACC may not have much oversight over final design (though Commissioners are still closely following the project’s progress).

Short recap: the original site plan for the Selig property did not contain the Hickory St. Extension.  The connection’s absence put the site plan in conflict with the Transportation Concept Corridor Map (TCCM), which showed a potential Greenway connection, and a street connection, between Broad and Oconee.  After much debate, Commissioner Girtz put forth a Commission-defined option of two “protected” bike lanes placed between the sidewalk and parked cars. This design would use parked cars as a buffer between bikes and traffic, similar to designs seen here: http://nacto.org/cities-for-cycling/design-guide/cycle-tracks/one-way-protected-cycle-tracks/ (but with front-in parking rather than parallel).  His Commission-defined option for the Special-Use Permit was approved in July or August of 2013. When the Selig project dissolved, so did the plans for Hickory.  With The Mark moving forward by right, new site plans were drawn.  Current designs for the development show a bike lane striped directly behind front-in parking: 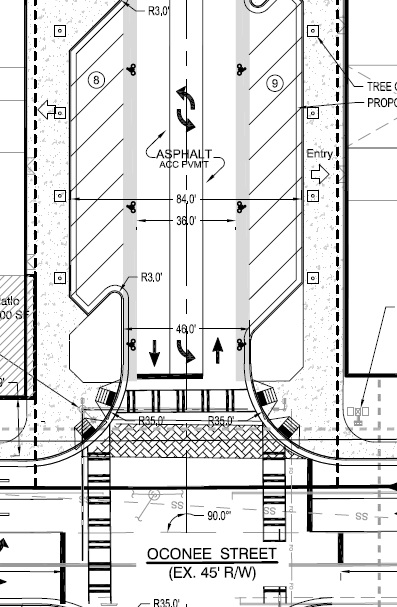 You can see the bike lanes abut the parking spaces

In a December 3rd, 2014, letter, Transportation and Public Works approved this design, agreeing the bike lanes adequately accommodate cyclists.  Indeed, the letter goes further to argue that this design is preferable to parking protected bike lanes.  We disagree.  Bike lanes striped behind front-in parking are hazardous to cyclists.  Protected bike lanes, including those that use parked cars to shield bikes from moving traffic have become best-practice design for urban environments.

Athens has yet to place bike lanes behind front-in parking, for good reason.  True, Athens does not have any written standards concerning bike lane design, our policies are purposefully context-sensitive; however, the Complete Streets Policy explicitly references the AASHTO (American Association of State Highway Transportation Officials) guide.  During the 2013 debate about Hickory, we noted: “The 2012 edition of the AASHTO Guide for the Development of Bicycle Facilities specifically recommends against such a design: ‘Bike lanes should normally not be placed adjacent to conventional front in parking.’” (Emphasis ours.) The AASHTO Guide continues to say that if bike lanes are striped adjacent angled parking great care must be taken to make the design safe for cyclists. The two pictorial examples of a compromise: 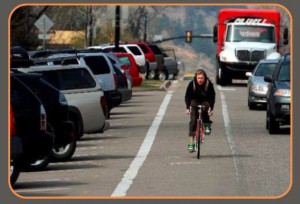 Here, there is a few feet of buffered space between the wide bike lane and front-in parking 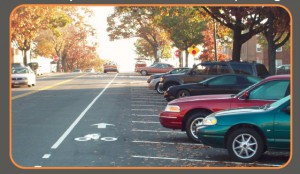 Here, the parking configuration has been switched to reverse angle (back-in)

On the left, there is a buffer between the parking space and the bike lane. On the right, they have switched to back-in parking.  Again, these are compromises; compromises that do not exist in the current layout.

Protected Bike Lanes are preferred by planners and cyclists

Nonetheless, perhaps creating a parking protected bike lane on Hickory Ext. would reduce the usable space for cyclists.  This is speculative until the final design is selected and constructed, but there are many easy and cost-effective methods for preventing cars from encroaching on the bike lanes (flexposts, parking curbs, etc…).  More importantly, as we will examine in a moment, the current design with bike lanes behind front-in parking does not provide a full bike lane of operating space.

Supporters of the current design also say a parking protected bike lane would be too difficult to integrate into the streetscape.  Luckily, there is a guide to help facilitate those changes.  The NACTO Design Book contains voluminous technical guidelines; and as mentioned earlier, there are 187 real world examples.  As illustrated above, the authoritative AASHTO Guide also provides alternatives to the current design.

Even if one accepts the argument that a parking protected bike lane would increase the conflict points (and we do not); the current proposed design does not reduce the total amount of conflicts on the street. What is clear, the current proposed design does increase the number of conflicts between cars and bicycles.  Every car or truck entering or exiting a parking space must cross the bike lane.  The current plans show a center lane that would allow cars in both directions to pull into a parking space. Of more concern, to exit a space a car must back through the bike, perhaps with vision obscured. These conflicts would occur at higher, motor vehicle speeds.

Finally, placing bike lanes so close to front-in parking effectively reduces the operating space of the bike lane to near-zero.  Under the current configuration, to avoid a car suddenly exiting into the bike lane, a cyclist should ride to the very left of the bike lane.  However, riding to the left puts a cyclist close to the travel lane—an uncomfortable position even for experienced cyclists.  The proximity to front-in parking spaces makes the travel lane the safest place to ride despite the presence of bike lanes.  For cyclists, the street would operate much the same as street without a bike lane.

The Current Proposed Design Does Not Accommodate Cyclists

As the bike lanes currently proposed for Hickory Ext. do not conform to AASHTO standards, decrease the amount of useable space of bicycles, and increase number of car-bicycle conflicts, we do not think the current design accommodates bicycles.  We recommend the design is changed to a protected bike lane, or at the minimum, changed to reflect greater consideration for cyclists’ safety, as recommended by the American Association of State Highway Transportation Officials.

There is a plan review tomorrow, 10:30am, at the Planning Department.  We will attended to see if the plan has changed and give comment, if possible.  From there, we also know the Commissioners are interested in this project.