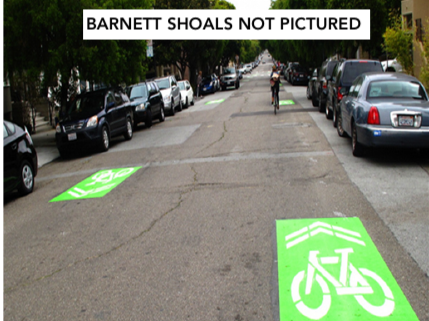 After months of debate and deliberation, there is a new Commission Defined Option for Barnett Shoals. A CDO means the design came from the commission—not staff. The “new” design is an old one, slightly altered: sharrows. We are not surprised the Commission wants to return Barnett Shoals between College Station and Whitehall to 4 lanes. A lot of people out that way want to keep the Barnett Shoals as high-speed as possible. But we want to be clear: sharrows do not help people on bikes. And we think they are inappropriate on such a high-speed section of road. Bike lanes remain the best solution to increase comfort and safety for people walking, biking, rolling, and driving.

We have good basis to say that sharrows do not help people on bike. The man who first designed sharrows for the city of Denver explained their anti-bike lane origins: “Part of it was the city of Denver’s reluctance to do much of anything for bicycles. So I figured, this would be a less expensive approach versus the conventional bike lane markings. A lot of the agencies don’t want to do anything involving change or spending money for bicycles. I was always under pressure to do less […].”

Sharrows are designed to encourage people to ride in the center of the lane to avoid parked cars (not a problem on Barnett Shoals) and to be more visible. Sharrows are also intended to alert drivers to the presence of bikes. But since sharrows do not create an exclusive space for people on bikes, they do little to improve safety. They do not improve level of comfort. They do not encourage more people to bike. A recent study of Chicago saw ridership on streets with sharrows grow less than on streets with no bike lanes or sharrows. The bike crash rate decreased on roads with sharrows by 20%. But crashes fell by 37% on streets that had NO bike lanes or sharrows. The crash rate decreased by 40% on streets with bike lanes. In Chicago doing nothing had more of an impact than adding sharrows. The take-away according to the researchers: “I think our main takeaway is that we need appropriate infrastructure,” Ferenchak said. “Sharrows don’t dedicate any space to bicyclists.”

The header photo of this article is taken from the Commission Defined Option sent to us this morning (we added the text). It shows sharrows on a narrow urban street with on-street parking. Barnett Shoals is a 4-lane road with no on-street parking and a 40 mph speed limit. On Barnett Shoals 15% of drivers are going faster than 47mph. Sharrows are not recommended for a street like this. The Federal Highway Administration’s legally binding Manual of Uniform Traffic Control Devices says: “Guidance: 02 The Shared Lane Marking should not be placed on roadways that have a speed limit above 35 mph.” Of course, it says should not shall. Placing sharrows on a 40 mph road is allowed, but it is not recommended. The FHWA of course, is a conservative body. The more bike-friendly National Association of City Transportation Officials (NACTO) also has guidance for the placement of sharrows:

“Shared lane markings should not be considered a substitute for bike lanes, cycle tracks, or other separation treatments […].”

“Generally, not appropriate on streets that have a speed limit above 35 mph.”

Quoting the City of Cambridge, MA: “Shared lane markings are not a substitute for bike lanes but are a benefit on narrower busy streets.” Athens in Motion Appendix B-6 and B-7 recommend sharrows only on neighborhood bike boulevards. They are not recommended on 4-lane, high speed streets.

But BikeAthens! That guidance is for regular sharrows! The ones shown above on an urban, neighborhood street have green paint behind them. Yes, the green-backed sharrow is currently an “experimental” design. (Note: the CDO available online still shows a continuous “super-sharrow.” The continuous-stripe design is not allowed by FHWA. The CDO will call for the green-backed sharrow). Since the design is experimental, we do not yet know if they work better than a regular sharrow. What is clear—no matter what the sharrow looks like—it is not a bike lane.

During the Barnett Shoals debate, there was a lot of talk about how protected bike lanes, a 4 or 5 star design depending on specifics, were not good enough. We heard that we should look to Athens in Motion for the final design; that the east side deserved the best of the best. As found in Chicago, doing nothing may be better than sharrows. The FHWA and Athens in Motion do not recommend sharrows on high speed streets like Barnett Shoals. This does nothing to help people on bike. We think the east side deserves better. We still believe protected bike lanes, or regular bike lanes, are the best solution for making Barnett Shoals a safe comfortable street for all of us.

Temporary Ban on Birds and Bike Share
Scroll to top