In the recent debates surrounding Chase St. and T-SPLOST, old cliches and past arguments returned. There is a persistent myth, intentionally crafted to maintain the status quo, that says riding bike is a frivolous leisure activity that only a few loners enjoy. We’ve heard it angrily shouted, regular folks don’t ride bikes! Therefore, bike lanes and other improvements are a waste.

Of course, there is overwhelming evidence that bike lanes etc. make driving safer and easier, improve public health, and would create a more vibrant Athens. Yet, those who believe in the myth of the loner “cyclists” still do not see far enough beyond their windshields to see the benefits. They see bike lanes only as an imposition. A concession to an overly aerodynamic special interest group. After all, real people do not ride bikes. Enough. Let’s expand our view beyond this myopia.

First, Athens has a national reputation for being bike friendly because so many people ride bikes in Athens. There are 4 bike shops, numerous bike clubs, and an uncountable number of people who ride to work, to school, and various other daily trips. Being on a bike does not make you a non-person. Secondly, in addition to recreational riders, racers, students, commuters—not real folks, apparently—there a lot of people who ride bikes everyday but may not self-identify as “cyclists.” 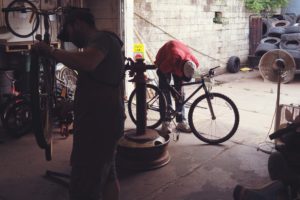 Between January and July 2017, our Bike Recycling Program (BRP) has donated 55 bikes to our partner organizations. We also provide free continuous maintenance on all these bikes. The 55 donations does not count the numerous previously donated bikes we have kept rolling, or outright replaced, with free or discounted repairs. Numbers are impressive, but they obscure the people who ride the bikes. We do not donate bikes to sit on shelves and collect dust. People request them, mainly, to provide critical personal transportation. Having a bike frees people from having to burden friends and family with ride requests. It expands the scope of the bus system. It is faster than walking. Our recipients use the bikes for the same reasons we all drive cars, take the bus, walk, or ride bikes: to get to work, to the libraries, to parks, to the doctor, or maybe just to have fun, exercise and spend time with family. 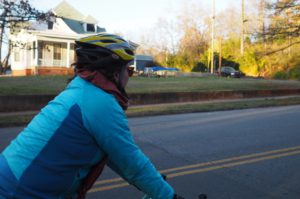 People are people no matter how we get around town. The important “question” is how to design the streets. Do we include everyone? Do we connect bike lanes to transit, neighborhoods, and community centers? Or do we design streets only for cars, and force real people else to the margins? These are rhetorical questions: complete streets, bike friendly streets work for real people. The alternative does not.  In cars, on bikes, on the bus, on foot: we all—real, living people—deserve safe, comfortable streets.