Supporters of the status-quo, lovers of traffic jams, will often claim, wildly, and without evidence that bikes are bad for business. Before we directly address the positive impact of bike lanes etc…on the local economy and traditional economic development, let us address a truth too often avoided. Transportation choices through better bike lanes can relieve the high, high cost of transportation for many families. The average American family spends 19% of their budget on transportation, 25% if they live in car-dependent city like Athens.

For lower-income individuals, bikes, especially combined with robust public transportation, can provide the inexpensive mobility necessary to move up the economic ladder. Owning a car is wonderful luxury.  It should not be a requirement to join the labor market. It should not be a prerequisite for enjoying parks, libraries, and businesses that are the building blocks of community. More bike lanes and paths makes it easier for our neighbors to get to work. It puts more money into people’s pockets. It empowers us to become more economically self-sufficient. It’s progress toward a more equitable Athens.

The phrase “bikes are bad for business” makes no sense. Vehicles do not buy things. Bikes do not patron local business. Neither do cars. People support local business. People shop locally. Opponents of transportation progress often elide references to people, focusing only on modes of travel. While this may seem a reasonable shorthand, it is an attempt to disguise the choices people make (or are not allowed to make). When we ride our bikes, we still like the same stores. We still want to go to the same places, eat at the same restaurants. Riding a bike does not change our fundamental wants and needs.

Study after study show people spend more money when they use a bike as their mode of travel. They may not spend more on a per trip basis. It can be difficult to use a bike for certain trips. Nonetheless, over a week or a month, people on bike consistently spend more money at each location. 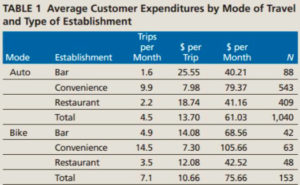 In other words, when we drive to Avid books; when we drive to Walgreens, we will probably buy a lot of stuff. But when we ride past Avid, we’ll probably stop in to say hi and buy a book we saw in the window (it’s easier to window shop at 15mph than it is at 45mph). We’ll do it it again a couple of days later. When we ride, we remember that we need batteries from CVS, or some envelopes from the post office. Then we get hungry and we stop in our favorite restaurant or coffee shop. Just as importantly, the money people on bike spend is more likely to stay in the local community. We often say we don’t want people spending money out of the county. If so, we should not build a four lane speedway leading out of the county. When we make it easier for people to take short trips to the businesses in their neighborhoods, people will walk, bike, work and shop in their neighborhoods. Bikes equal business, because people equal business. And people ride bikes.