On April 19th, Board Chair Jason Perry presented Jon Skaggs with the 2018 Tobias Smith Volunteer of the Year award.  Here is the speech Jason gave to mark the occasion. 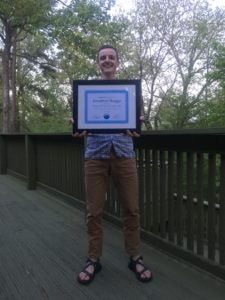 “In 2014 BikeAthens lost our young friend Tobias Smith, whose enthusiasm and grace were a bright light in our Bike Recycling Program workshop. In his honor, we created the Tobias Smith Volunteer of the Year award, and it is my great pleasure to present this year’s award to Jon Skaggs.

Jon started volunteering with us in 2014 and has racked up over 400 shop hours since then. What’s remarkable though is well over half of those hours are from the 12 months, so I guess it helps that we moved a block away from his house. In fact, his hours are most likely underreported, because I know he sneaks in on his own to sweep the floor, tidy up the work benches, and use our internet.

Jon is known in the BikeAthens family for his superhuman friendliness, his attention to detail, and his penchant for building outrageous contraptions. I was told to mention his terrible jokes, but I think he’s hilarious so I’m going to overrule that.

He started with us as a fresh-faced undergrad, and we were thrilled when he decided to stay in Athens for graduate school. It is wonderful to have him on our team.

On behalf of everyone at BikeAthens, thank you and congratulations, Jon.”