Bikes are a highly efficient mode of transportation. People on bike take up less space. Bike lanes and paths often make travel-times more consistent and predictable. When people ride a bike rather than drive a car, there are literally less cars on the street—there is literally less “traffic.” Additionally, design changes to create more people friendly, family friendly streets make our neighborhoods safer for everybody, of all ages and abilities.

By law, bikes are a vehicle. Therefore, people on bike are part of traffic. When people vaguely assert that bikes are bad for traffic, they really mean: “bikes slow me down when I am in my car.” This is not true and has never been true. Bike lanes, protected bike lanes, and side-paths make our streets work more efficiently.

Streets with bike lanes use space more productively because bikes take up less space, and people are more comfortable riding in close together than they are driving in a cluster. Research indicates a bike lane or path has a vehicle capacity of about 2,000 bikes per hour per 3 feet of width (this is the low-end of observations). A 6 foot bike lane has the capacity to move 4,000 people per hour; 32,000 people in a work day. For comparison, about 25,000 cars travel through the Lexington / Loop 10 intersection per day. Bike lanes move more people using less pavement. That is one reason streets with bike lanes have either the same travel times, or faster travel times.

It is important not to confuse speed with travel time. Yes, cars have higher top-speeds than people on bikes. But in a city with frequent stop signs, stop lights, buses, crosswalks, and on-street parking, travel times for a person on bike and a person in a car are similar. If we include the time to find a car parking spot, park, and walk to your destination—and we should count this time—bikes are faster. The person commuting by bike has won Savannah’s commuter challenge every year. 8 years. Undefeated. We must acknowledge that in car-centric cities like Athens and Savannah, short car trips do not allow cars to reach top speeds. Indeed, we would not want to promote speeding. Already, even without robust networks of bike lanes, travel times for car and bike are similar for many trips. Adding bike lanes does not increase travel times for people in cars. It often does the opposite.

With cities doing a better job of collecting before and after data, experience demonstrates that travel times remain constant as we add bike lanes. Speeds may be lower, but over the course of the trip the total travel time remains the same (not to mention the reduction of delay caused by a person riding in the travel lane when no bike lanes are provided). This result should not be surprising. A person on a bike is almost always a person who would otherwise be in a car. Opponents of bike lanes will falsely allege bike lanes reduce street capacity. In reality, bike lanes give people the choice of leaving their car at home and riding. The same amount of people use the street, but with bike lanes, the people on bike take up much less space. The addition of biking the lanes increases our streets’ ability of the street to carry people. Remember, just 6 feet of bike lane can increase the amount of people on the street by hundreds and even thousands of people per hour!

Bike lane and sidewalk improvements reduce traffic chaos and make streets more predictable by providing every user their own space to operate. Separating uses makes streets more comfortable for people on bike by eliminating (or greatly reducing) the threat of being struck from behind. Bike lanes help drivers by eliminating the confusion about how to safely pass a cyclist. Remember: at least 3 ft. safe passing is required by law. After installing miles of protected bike lanes, New York cities reflected on the improvements’ successes. Simply stated, they measured huge safety benefits by making streets that are simple, clear, and easy to use. One main technique of simplifying the street: clarify, with street markings, where each user belongs.  In other words, install bike lanes. This graphic shows how common street improvements reduce the complexity of a car-only environment: 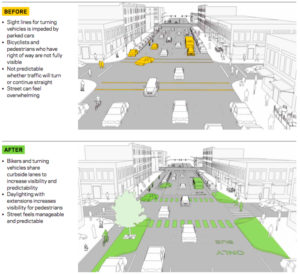 When we give people on bike clearly defined places to ride, their behavior becomes more predictable. In NYC, Washington DC., and Denver the installation of bikes lanes reduced the rate of sidewalk riding by “an average of 56%.” In Chicago, compliance with traffic signals is higher on streets with protected bike lanes.

As drivers become accustomed to seeing people on bike in the same places, drivers will look for, and see people on bikes. Improved visibility, both actual and psychological (as drivers learn to look in the same places for people riding), also makes streets safer. Cities that install protected bike lanes see large decreases in crashes—not only for bikes—but for all modes. All these safety improvements predictably lead to a large uptick in the number of people walking and riding. As more people walk and ride, crashes go down. There is safety in numbers. It is a virtuous cycle (pun intended). Let’s start working on it today.