Board member, friend, advocate: Carrie McCarty is migrating to the west coast to work on salmon projects with the National Forest Service. We will miss her energy and positivity.

Carrie has been involved with BikeAthens since 2013. She has volunteered in the shop, worked on our Policy Committee, and fueled our Outreach Committee.  She helped plan and organize The Ride that Owns Itself I & II.  Carrie was deeply involved in the success of all three Bike, Camp & Swim overnight rides.  She was a member of the Blueberry Pancake Breakfast Club. There’s more! 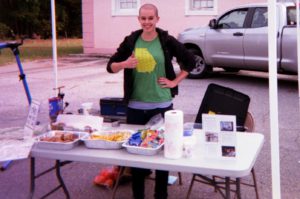 Carrie brought alley cats back to the streets, and along with Patrick Stanley, created the widely inventive Delta Delta Die! Alley Cat Race.  She poured-in hours to make our Twilight Parties such a great time.  She was a big part of the UGA Campus Co-op!

More than all the work she did, Carrie was an enthusiastic, generous, and welcoming presence on the board, and in the community.  Thank you, Carrie, for all the time and effort you devoted to BikeAthens.  If you make it back to Athens for the Holidays, we will save a spot in the parade for your single-speed. Good Luck!

My Precious! Tips to Reduce Bike Theft.
Scroll to top