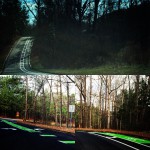 In addition to the cool improvements to Lumpkin, here are updates about a few other local projects:

When ACC went to re-pave Riverbend Pkwy, they realized the lanes were veeeeery wide—almost 22 feet!  With all that space, when they re-paved the street, they marked-in Athens first buffered bike lane.  The buffered bike lane adds more space and clarity to street. At the intersection, ACC again used GREEN paint to highlight a potential conflict area. As you can see, the green lane directs bikes to avoid the right turn only lane.  This makes people on bikes more visible and should reduce the chance of a “right hook.” 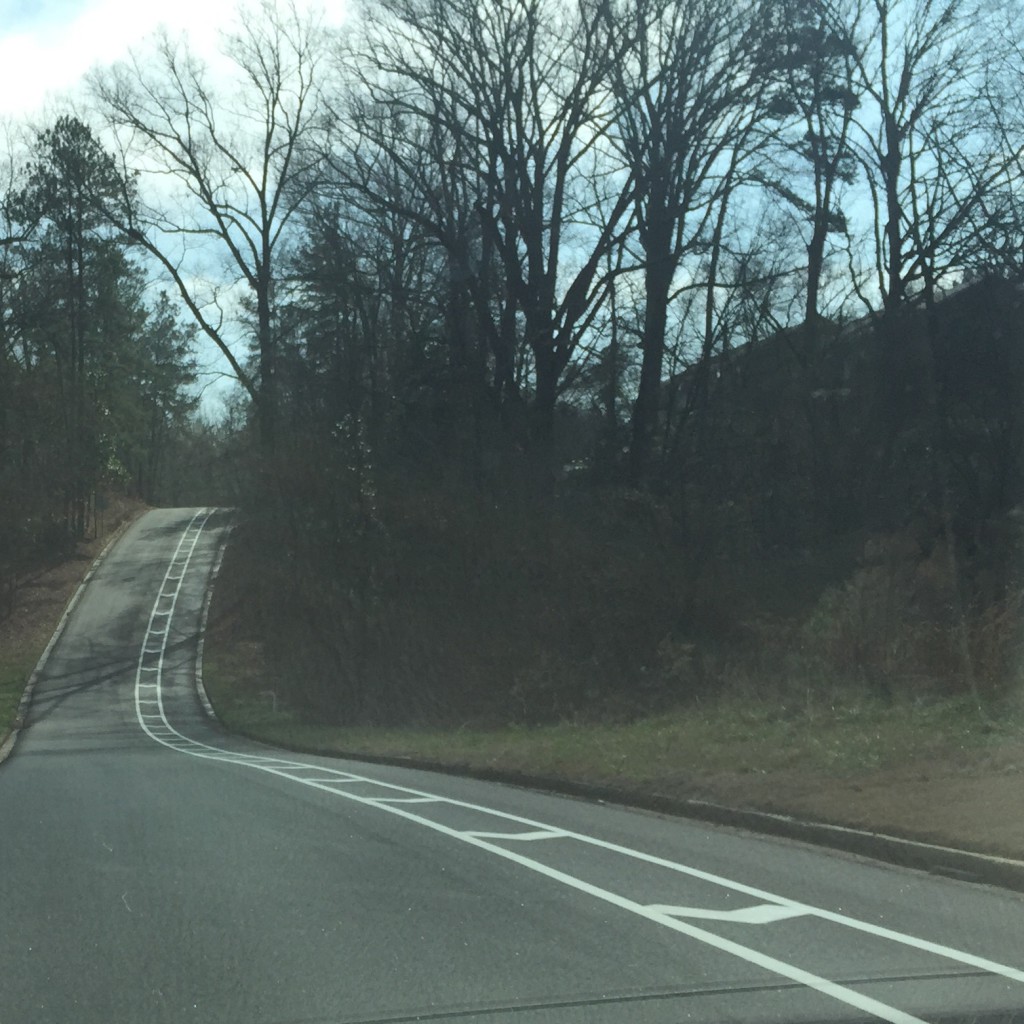 Now everyone has more elbow room 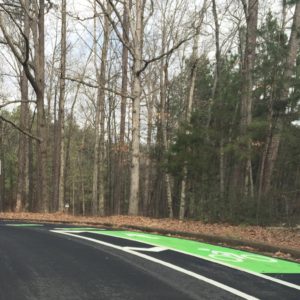 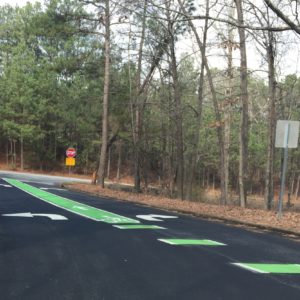 The green lane highlights how to avoid “right hooks”

Back in October, we wrote about the Baxter Re-Paving At the time, the permanent lane makings and not applied. Now that new stripes are baked into the street (almost literally!), its time for an update—

First, you may have noticed there are now “sharrows” in the center of the lane between Milledge and Rocksprings. ACC Transportation and Public Works placed them at our request. We asked for sharrows because the lane dimensions never allowed enough space for a 4-foot bike lane.  The lane widths for most of the block are tightly constrained to their minimums.  As we noted in October, the 3 feet of extra space on Baxter is a rideable shoulder.  It is not a bike lane and we did not want it marked as such. If you are riding, you can use the shoulder if you want. But given its narrow width, you may also ride in the travel lane to make yourself more visible, provide space to avoid objects in the street, and discourage un-safe passing.  The “sharrows” also alert drivers that people on bike may be in the travel lane.  Would we like a wide, protected bike lane on Baxter? Of course, but for this re-paving project, the only real option involved new lane configurations through different pavement markings.  It’s not ideal, but the “sharrow” clarifies of a tough situation. 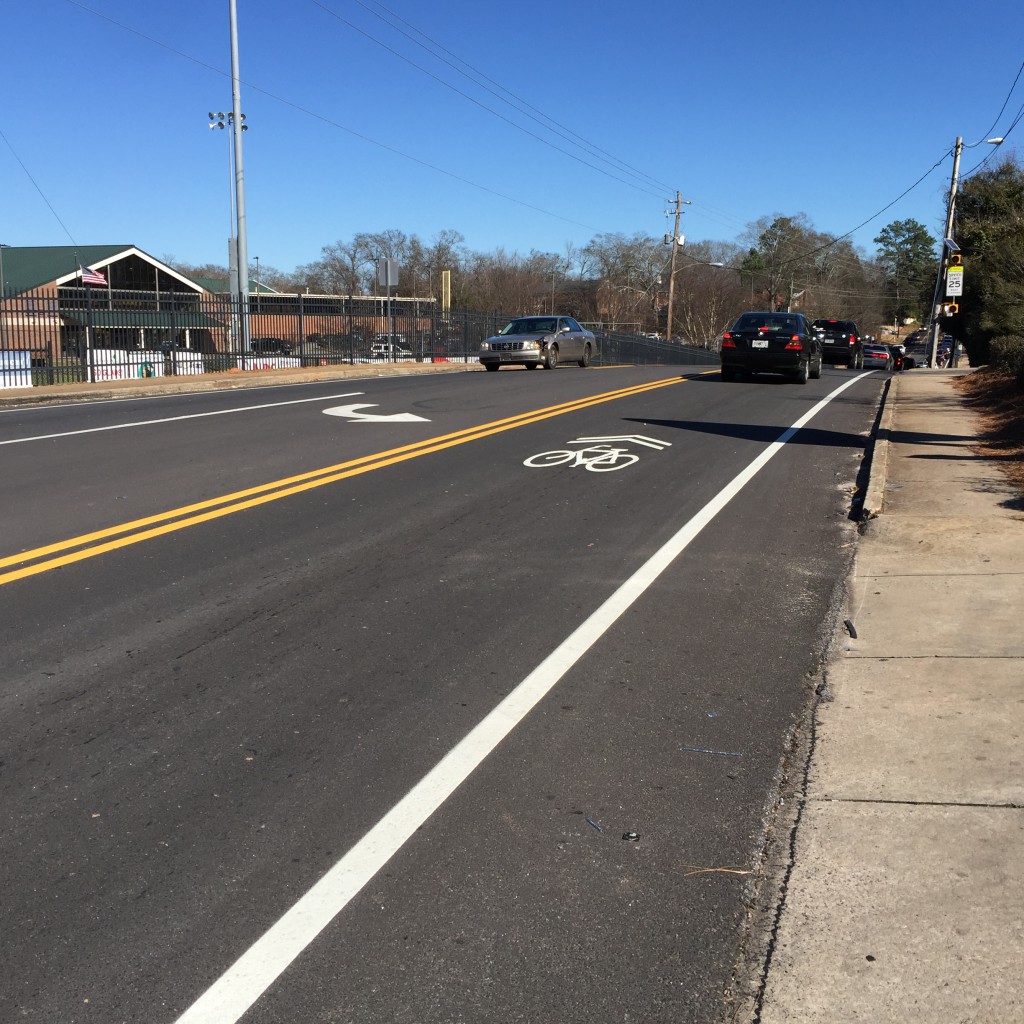 The sharrow clarifies that that this is NOT a bike lane.

Further down the hill, as Baxter snakes toward Alps (or vice versa), the source of stress is the stormwater drains, which encroach into the bike lane.  While ACC did not have the opportunity to correct this during the limited re-paving project, ACC Transportation and Public Works did respond to our concerns with new reflective markings that highlight the storm drains.  Again, not an ideal situation—but the ultimate solution was not available during the limited repaving opportunity.

We’ve received a lot of concerned comments about the bridge work.  If you have ridden or driven over the bridge, you’ve noticed half the bridge is complete and the lanes are open. However, the completed section does not have marked bike lanes (the total project is only 53% percent done).  We are looking into it, and GDOT has told us that finished bridge WILL have bike lanes.  The project should be finished this October, and we’ve been told it will have bike lanes by then. Of course, knowing the bike lanes will be added in October does not make the crossing less stressful for all the people who use College Station as their daily commuting corridor. Still, this is all the information we have at the moment. UPDATE: We’ve heard back and that seems as specific as GDOT can get.  So bike lanes will arrive sometime before October 31, weather permitting.

The Many Benefits of a New Bike Plan
Scroll to top