Right before BikeAthens left for the National Bike Summit, we started a new blog: Bike Friendly Friday.  Every Friday, we add new new post to further the discussion of how Athens can become a more bike friendly community.  If you haven’t been following the posts, here is your chance to catch up, as we run what TV would call a “clip show”

In 2011, the League of American Bicyclists named Athens-Clarke County a bronze-level Bike Friendly Community.  The award made Athens only the third Georgia Community to receive the award.  We wrote at the time: “Athens-Clarke County was selected as a Bicycle Friendly Community at the bronze level, recognizing a strong commitment to cycling, responsive to the needs of cyclists, and with bicycle usage above average for U.S. communities. When it is time to reapply for BFC status, Athens-Clarke County will have the chance to become the first silver, gold or platinum community in Georgia.” What went unremarked is that BFC designations last only four years. 2015 is the time for ACC to reapply.

Over the next 42 weeks, we’ll be blogging here at Bike Friendly Friday to highlight the progress Athens has made in the last four years; and perhaps more importantly, begin to sketch out a road map to advance Athens to a Silver or Gold Bike Friendly Community.  So bookmark this page! As next week as we’ll update from the National Bike Summit, and place Athens bike advocacy in the context of the national movement.

We are writing this post in the almost literal shadow of the US Capitol, as BikeAthens has just finished a week at the National Bike Summit.  Three full days of workshops, networking, learning, laughing, and oh yeah–talking with Georgia Senators and Representatives about the need to continue funding biking and walking in the next multi-modal transportation bill.  We are champing at the bit to return to Athens full of energy and new ideas for how to forward our vision of a comprehensive transportation network everyone can use with confidence and ease.

Attending the summit always exposes us to big ideas–one of the biggest this year was a panel discussion about Vision Zero.  Vision Zero is a policy and a fervent belief that all traffic fatalities are preventable–that all traffic fatalities and serious injuries can be eliminated and that no level of traffic deaths is acceptable. The Bike Summit Panel included representatives from Philadelphia, San Francisco, San Diego, and New York City; but the rapt audience proved that many cities are interested in Vision Zero Policies. 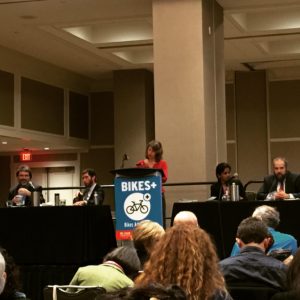 Leah Shahum, the Director of the Vision Zero Network, leads a panel discussion about Vision Zero policies around the country

Now, one day after the Summit has ended, we are still feeling the rush from all the excitement, but as we continue to advocate for an enhanced, multi-modal transportation network; as we work to move Athens toward a Gold level Bike Friendly Community designation, you may hear us talk more about Vision Zero for Athens.

Now that we are back from the bike summit, and back to regular hours, we’ll begin to focus these posts on Athens efforts to move up the Bike Friendly Community rankings.  In evaluating a community, the League of American Bicyclists looks at the 5 E’s: Engineering, Education, Encouragement, Enforcement, and Evaluation & planning.  Before the year is over, we’ll go through each criteria looking at the 2011 League feedback, as well as what we’ve done in the interim (for example, through a partnership with the Municipal Court, Bike Athens has taught basic bike safety to over 750 people in the last two years—Education).

In 2011, the League ID’d the “four most significant measures” Athens should take to improve the streets for those on bike.  In 2015, the four measures provide a snapshot of how far we’ve come, and where we need to go:

1. Expand efforts to evaluate the bicycle usage and crash statistics.

2. Offer a bicycling skills class on a regular basis [emphasis theirs]

3. Fully implement the comprehensive bike plan and continue to close gaps in the network. […] Set an ambitious, attainable target to increase the percentage of trips made by bike in the city.

4. Expanding the bicycle and pedestrian manager’s time focused on these projects.

There’s the wide-area road map to a more “bike friendly” Athens.  We’ve improved the educational opportunities in town, but there are ways to improve the other Es.  And that’s what we’ll be talking about it the weeks ahead! Remember, every Friday is Bike Friendly Friday!!

The Downtown Athens Master Plan Implementation Committee is running full swing–just yesterday they discussed the possibility of creating TADs (tax allocation districts).  We were surprised at the flexibility and fundraising of TADs.  Their use could bring a lot of changes to downtown, and bring a lot of benefits to all of Clarke County.  In the coming weeks, the discussion will turn to the transportation and street design items of the master plan (to save space, let’s just call it the DMP).  When discussing of the role of bikes in the downtown infrastructure, the DMP unsurprisingly notes: “Key to the continued improvement of Athens downtown vitality and quality is the evolution of a very comprehensive transportation system both as means of access to and from the downtown as well as excellent access throughout it. The enhancements must include transportation by:  A. Auto  B. Transit  C. bicycle  D. Pedestrian” (p. 59)

As important as bikes—well, the people who ride bikes—are to the downtown ecosystem, it is more important that there are convenient, accessible, and comfortable routes to downtown.  Incorporating our feedback, the DMP correctly reports, “[t]he input from the bicycle community has been to develop corridors to get bicyclists to and from downtown and not necessary around inside it of it where they can move with other traffic.”  In other words, with traffic calming, shared lanes can work downtown.  It is more important to facilitate trips to downtown.  The League of American Cyclists noted the lack of bike lanes on arterial streets:

Here is what our bike map looks like if you remove all streets without bike lanes: 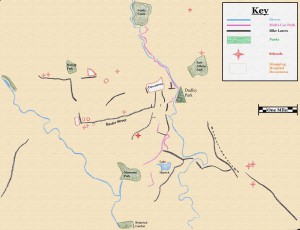 Need more connectivity before we have a network

Last week we talked about the need for Athens to better integrate bikes into arterial street design. With greater access to downtown, more people will ride downtown, and more people will be downtown.  However, our focus on better access to downtown does not mean we think downtown and the downtown master lack opportunities for improvement.  Indeed there are a couple of tweaks that would greatly improve downtown streets for everyone.

First, Athens could consider reversing the angle of parking space to make it exiting a space easy, safe, and visible.  Pulling into a downtown space is easy.  Backing out of a space is not: 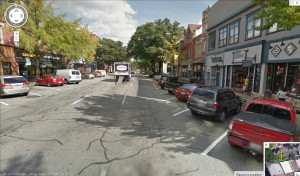 Parked cars block our view as we back into traffic. This configuration is also tricky when we’re riding: we cannot see (or make eye contact with drivers), and cars may suddenly into our path. Flipping or reversing the angle of parking solves this traffic dilemma.  Reversing the parking angle means we’d back into the space, and pull into to traffic: 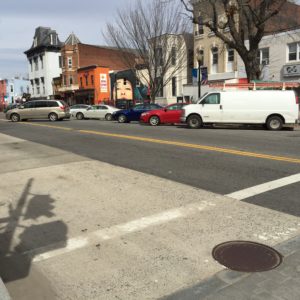 On this DC street, drivers can see and be seen!

With this configuration, when we exit the space, we have a full view of oncoming traffic.  When on a bike, we can now make eye contact and communicate with drivers.  Visibility is improved! Safety is improved! And it really does not change street operations. The parking movements are the same; the order is simply reversed.  Last, it’s cheap! This change can be made during street repavings at no extra cost!

Second, Athens should bring shared streets to downtown.  But wait! you say, don’t we already share the road?  Shared streets go much further than a mere sign: shared streets subtly reorganize street-space to give equal priority to people on bikes, people on foot, and people on cars.  Shared streets work by eliminating by blurring the lines between uses. Rather than pushing people to the edges of the road and placing cars in the center, shared streets allow more mixing between walkers, and riders, and drivers. Shared streets often eliminate curbs and lane lines and they post low speed limits.  While this seems like chaos, it can greatly improve street safety.  It turns out a little bit of chaos makes everyone pay a little more attention. The graphic cross section of a shared street looks fairly…pedestrian: 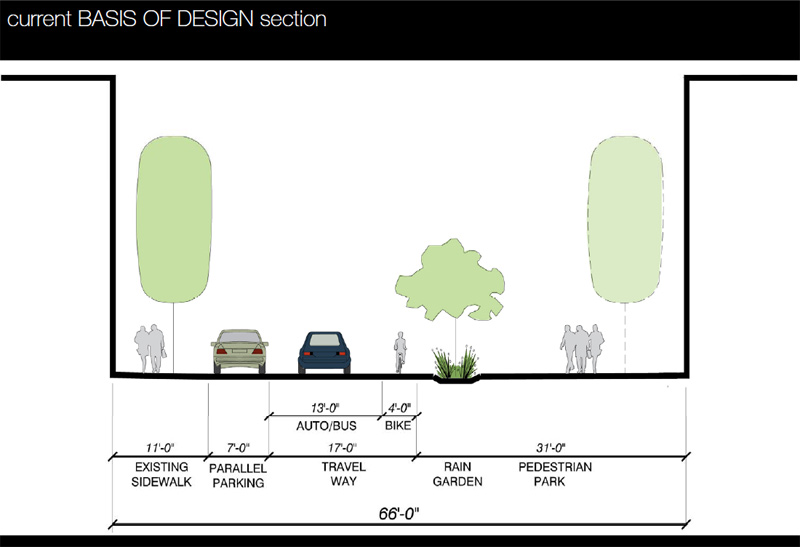 The aerial view of Seattle shared street better reveals how a shared streets looks and operates more like a plaza: 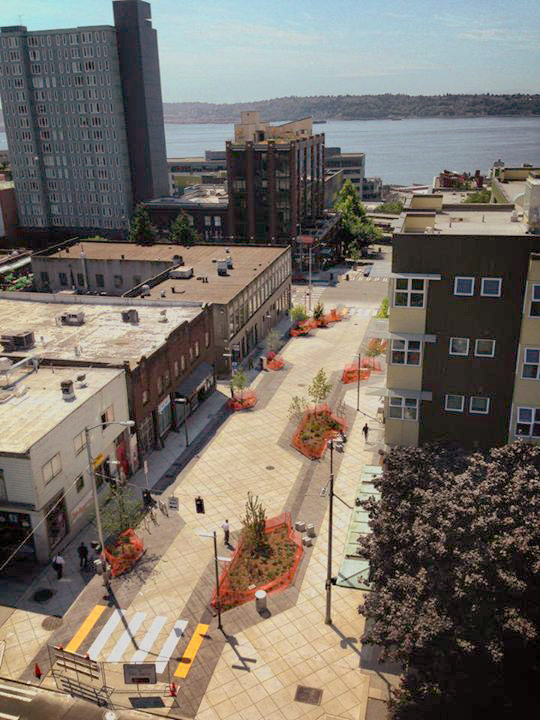 The aerial view looks more like a plaza or promenade, but cars are not prohibited.

The Downtown Master Plan currently calls for more sidewalk space—Pedestrian Corridors—along College and Jackson.  Why not shared-streets?  A shared street design would allow College and Jackson to act like true Promenades without closing the street to cars.  Sounds like a win all around!!