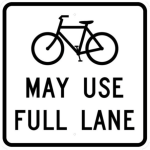 When people are riding their bikes, seeing a Share the Road sign is a powerful affirmation of their rights as operators of legal vehicles. When people drive, Share the Road can be a gentle reminder to always be courteous to people on bikes and to give 3-feet passing distance.  However, rigorous examination of the sign’s effectiveness reveals a schism between how “cyclists” and “drivers” receive Share the Road’s message. The difference between the groups’ interpretations increases confusion and conflict. It leads us to conclude Athens-Clarke County should no longer use Share the Road signs on approved bicycle routes.  In its place, ACC should install the clear, informative, and unambiguous Bicycles May Use Full Lane. 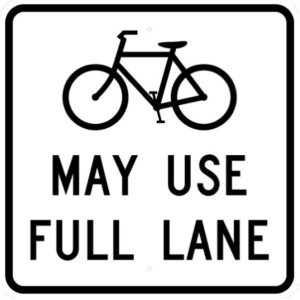 This argument has 3 points: 1) due to Share the Road’s unclear presentation, different user-groups have starkly different interpretations of its message 2) the Share the Road sign does not provide any relevant, actionable information, and 3) scientific research, engineering expertise, and bicycling education curricula all support the conclusion Bicycles May Use Full Lane more clearly announces the rights and responsibilities of people on bikes and in cars.

First: Share the Road has an ambiguous target group—who should share?  While this seems like a rhetorical question—the sign reminds drivers to be polite and give people on bike a wide-berth, right? Actually, many people behind the wheel see the opposite: they believe the sign is aimed at bicyclists, and they think the sign instructs people on bikes to quickly move to the right-most edge of the street.  This ambiguity about the sign’s intended audience (cars or bikes); this confusion about who should share (bikes or cars), led Bike Delaware to mount a successful campaign to remove the sign from all state roads. In 2013, DelDOT agreed to suspend installation of Share the Road signs, and replace Share the Road with Bicycles May Use Full Lane when maintenance requires. 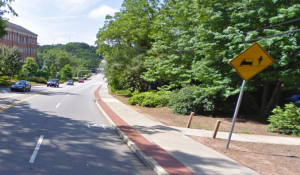 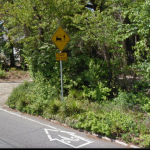 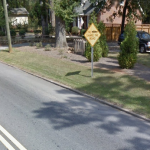 Secondly, the Share the Road sign also does not provide any information about legal rights and responsibilities.  Nor does the sign give any instruction about how cyclists and drivers should behave.  When developing the Bicycles May Use Full Lane, one technical advisory group stated: “The current signs [Share the Road and the bicycle silhouette] provided in the MUTCD cannot properly instruct road users in safe overtaking. […] This sign assembly does not convey a clear message, as different users have different understandings of what sharing of the road means” (Page 2).

Georgia state law certainly goes beyond simply encouraging people to share the road, it describes very specific behaviors. Under Georgia state law, when riding a bike you may ride in the center of the lane [§40-6-294]—indeed two people may even ride side-by-side [§40-6-294].  (Note the careful use of may versus must.) When passing someone on a bike, the driver must give 3-feet safe passage [§40-6-56].  These sections of code delineate specific actions; they prescribe behavior above-and-beyond the aspirational call to “share.”  Share the Road does not highlight the 3-foot safe passage statute.  It does not tell people where to position their bikes. State law is not reflected in the text.  State law is not reinforced by the signs’ graphics.  Anecdotally, at BikeAthens we often hear complaints from drivers about legal bicyclist conduct—complaints of “bikers” using the left turn to turn left, or grumbles about people riding in the center of a narrow lane.  These are perfectly legal maneuvers that are being obscured by the overly-simplistic, “share the road.”

On streets with narrow lanes, Westlake Rd (ACC Bike Route 6) for example, there is not enough space for a car and bike to operate side-by-side, with the legally required 3 feet separation.  To discourage drivers from attempting to squeeze past, bike-safety classes, ours included, teach students to ride in the center of the lane—use the full lane—to discourage dangerous passing.  (Note: Drivers may cross a double yellow line to pass a bike, if safe to do so. [§40-6-46 (c)]).  Bicycles May Use Full Lane thus summarizes an important lesson in safe-riding: on narrow roads the safest position may be the center of the lane. The technical guidelines found in the Manual of Uniform Traffic Control Devices (MUTCD) similarly note, “The Bicycles May Use Full Lane (R4-11) sign (see Figure 9B-2) may be used on roadways where no bicycle lanes or adjacent shoulders usable by bicyclists are present and where travel lanes are too narrow for bicyclists and motor vehicles to operate side by side.The Bicycles May Use Full Lane sign may be used in locations where it is important to inform road users that bicyclists might occupy the travel lane.”  Truly, the Bicycles May Use Full Lane sign does more than merely reflect state law—it clarifies, informs, and educates everyone who drives or rides past.

Supporting this conclusion, the latest peer-reviewed research found Bicycles May Use Full Lane increased both knowledge of safety & the rules of the road among novice cyclists and car commuters (Share the Road signage did not).  The study surveyed 2,000 people, and the authors concluded: “‘Bicycles May Use Full Lane’ signage showed notable increases in comprehension among novice bicyclists and private motor vehicle commuters […].”  The study’s authors suggest,” departments of transportation consider replacing “Share the Road” signage with “Bicycles May Use Full Lane” signs, possibly in combination with shared lane markings, particularly in places where lawfully passing within the same lane is not possible.”

Talking with ACC, we have heard they do not like to put up signage “that merely reflects state law.”  We agree that so-called sign pollution can lead to people ignoring signage.  However, in this situation, the current signage miscommunicates and muddles state law. in contrast, Bicycles May Use Full Lane goes beyond reflection to clarify people’s rights and responsibilities. It suggests where people should position their bikes. It reminds drivers that bikes are vehicles. Bicycles May Use Full Lane makes the streets safer.

We have also heard that some in ACC believe Bicycles May Use Full Lane would confuse visitors from outside the county, and ACC should wait until the signage is adopted state-wide. Respectfully, we do not see how the clear wording of Bicycles May Use Full Lane would cause confusion. To the contrary, since many visitors from out-of-county may not be used to driving in a bike-friendly community, the concise, informative Full Lane signage would increase driver understanding.

Let’s do the Barnes Dance, yeah!
Scroll to top