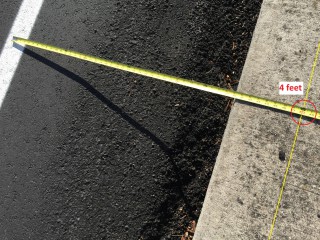 All of us who drive, ride, walk, and bus on Baxter St. have noticed the brand new pavement ACC recently laid down.  While we always appreciate a newly paved road—riding freshly paved blacktop is one of life’s greatest pleasures—it’s also a bittersweet reminder of the long, strange history of Baxter bike lanes.  Here’s a run down of the good news / bad news on the Baxter bike lanes.

Again, the good news—Baxter was repaved!  And its super smooth!  But for the moment, that smooth ride comes with a caveat—the temporary painted lanes are not the typical 4-Foot Width. (Click to enlarge) 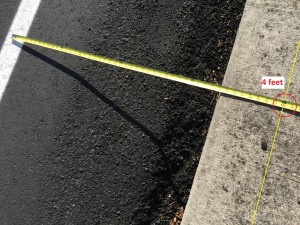 They measure 3’4″ outside of Chonell’s

Why does this matter?  According the American Association of State Highway Traffic Officials (AASHTO), 4-feet is the current minimum width for an official bike lane (p. 22).  This recommendation is unchanged from 1999; and actually, for streets with curb and gutter, the recommended width is 5- to 7-feet.  In 1999, after Baxter was to converted to its current configuration, ACC reported that since they did not provide the 4-feet needed for bike lanes, they would call the edge of the road a “shared bicycle area,” and they marked it with dashed lines, as seen on Hawthorne. For the moment, Baxter has been repaved with the “shared bicycle area” dimensions. However!!! There is good news: these markings are only temporary!!! According to ACC Transportation & Public Works, they will be widened to 4-feet when the lanes markings are made permanent (ABH story may be behind paywall).

Further up the hill, between Milledge and Rocksprings, there is not enough pavement to create 4-foot bike lanes, which means those will have to remain as unmarked bike-able shoulders. 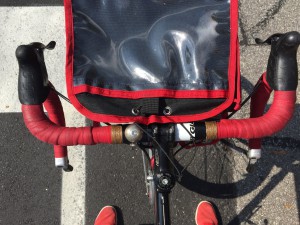 3-ft, like between Milledge & Rocksprings is the absolute minimum operating space

We appreciate this space and will use it when it is clear of debris, but it is not a bike lane.  (We will address appropriate signage for this block in a follow-up post.)

Unfortunately, there is still a safety issue on Baxter that cannot be easily solved by lane markings.  Over the years, and multiple repavings, the “mouths” of the stormwater drains have opened to where they now extend half-way into the bike lane, drastically reducing the bike lanes’ useable area.  A close looks illustrates the problem. 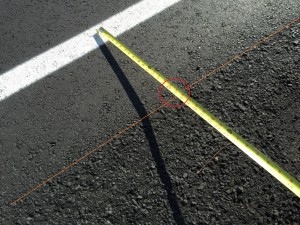 It is a tight squeeze that leads to people on bike either swerving in and out of the bike lane, or more likely, avoiding the bike lane altogether

The encroaching slope leaves only 16 inches of safe space to ride.  At night, especially, this creates a real, serious hazard to people on bike.  For that reason, ACC will use reflective marking to alert riders and drivers to the hazard. We raised these concerns with Commissioners back in May when ACC released the list of roads to be repaved, but we admit this may be a problem that cannot be easily solved upon repaving (or perhaps our concerns were lost in the shuffle).

Either way, this demonstrates the need for:

Bicycles May Use Full Lane
Scroll to top