Find and write your commissioner

While we are at it, let’s talk a little more about why the design for Barnett Shoals is so exciting, and how this stretch of Barnett Shoals fits into the “bigger picture” as described in the upcoming Athens in Motion walking and biking master plan. 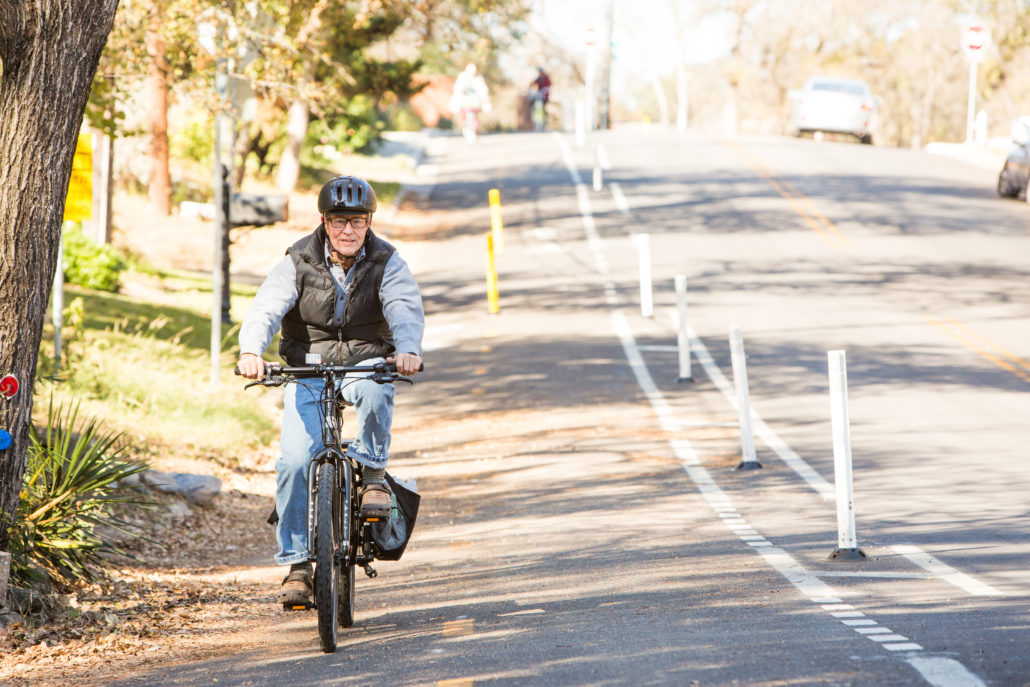 A protected bike lane offers all the benefits of separate multi-use path, but inside the curb, and at a fraction of the cost. Protected bike lanes use vertical, physical separation to separate car and bike traffic. Since the bike lane / path is inside the curb, there is also a barrier between people biking and using the sidewalk. And, of course, a HUGE buffer between people walking and car lanes. Protected bike lanes have many names: cycle paths, separated bikeways, and on-street bike paths.” That last one is most appropriate for Barnett Shoals. The recommended plan would convert an under-utilized lane on Barnett Shoals into a 2-way on-street bike path, fully separated from traffic. Building the path at the same time the road is repaved would greatly reduce the costs. 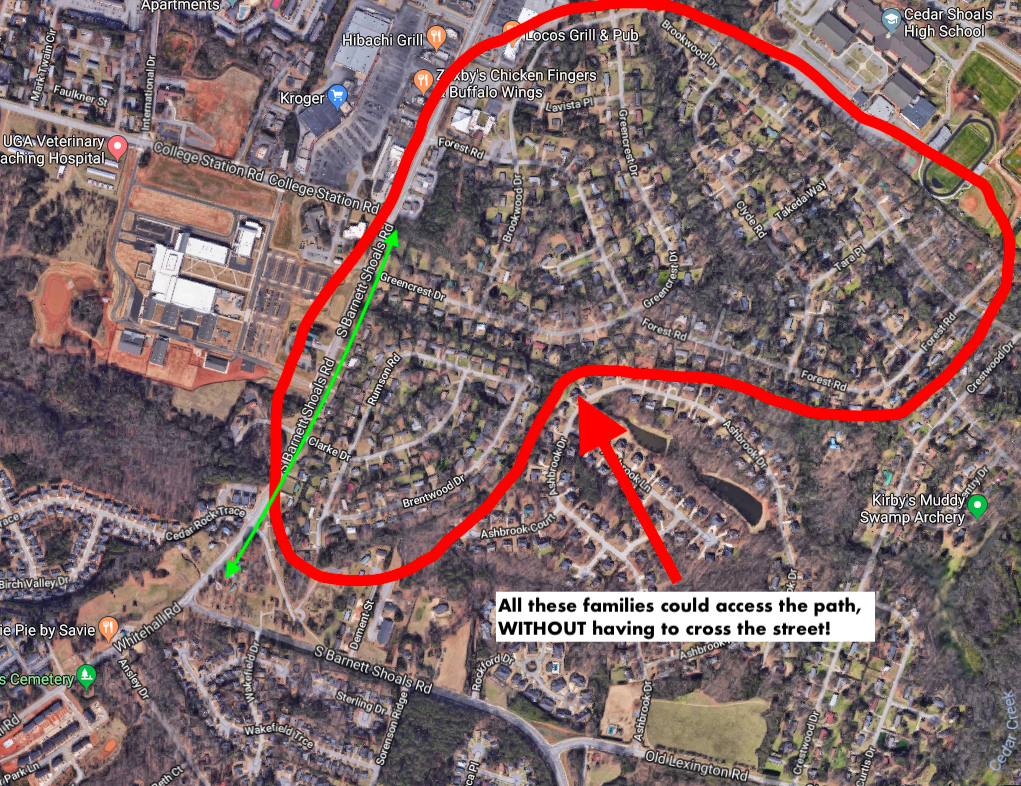 Commissioners have suggested scraping the current design and building a path on the west side of the street. In vacuum, on-street bike paths and side paths are equal designs. Both protect people walking and biking from car traffic. In this case, however, location matters!  Placing the on-street bike lane on the southeast side of the street makes it much more accessible to people. The recommended location provides direct access to a bike path to most of the Green Acres neighborhood. Look at all the families that could access the bike path from their front door.

If commissioners approve a side path on the west side of Barnett Shoals, Green Acres loses direct access to safe, comfortable biking. To use the path, these families would have to cross 4 or more lanes of traffic! Plus, this section of Barnett Shoals does not have mid-block crosswalks. To get to the sidepath, families would have to walk their bikes down the sidewalk and cross at a College Station. Such a difficult crossing fails to provide much needed connectivity between neighborhoods and all the shop / dining / retail choices just up the street. This barrier would mean the primary beneficiaries of the path would be people working or studying at the Vet School.

Finally, positioning the on-street bike path to the southeast avoids the Fire Station drive-way. When leaving the firehouse for an emergency, our Firefighters should not have to deal with the added stress of exiting over a multi-use path.

The recommended design for the Barnett Shoals on-street bike path is inexpensive and easy. It is located inside of the right-of-way, so ACC already owns the land. This is a repaving project, so the street will made into a blank-slate that can be easily rearranged. This is the best time to quickly and cheaply implement a high-quality project. Sidepaths / multi-use paths are usually estimated at $1,000,000 a mile. The construction and land-acquisition can be complex and time consuming. Plus, since this is a repaving, there is no money in the budget for a sidepath! Commissions are talking about using TSPLOST funds, but this is not a TSPLOST project. The upcoming Athens in Motion plan for biking and walking will recommend at least 4 critical projects for TSPLOST funding. Barnett Shoals is not on this list. In fact, Barnett Shoals is NOT even a top priority Tier 1 project. Using TSPLOST money for this project would take money from one of the highest priority projects. The recommended design, taking advantage of repaving, puts a bike path on the ground, while preserving TSPLOST funds. It is fortuitous quirk of timing that we should take advantage of.

In 2017, BikeAthens and Complete Streets Athens celebrated the introduction of Level of Comfort as a new metric for measuring the success of bicycle infrastructure. Barnett Shoals currently has a Comfort Level of 4. (PDF Page 2. On a scale of 1 to 5; 1 is the best, 5 is the worst. Only the Loop, sections of HWY 78, Hull Rd. and Commerce are rated a 5). An on-street bike path, especially one on the same side of the street as Green Acres, will increase the level of comfort to a 1 or a 2. 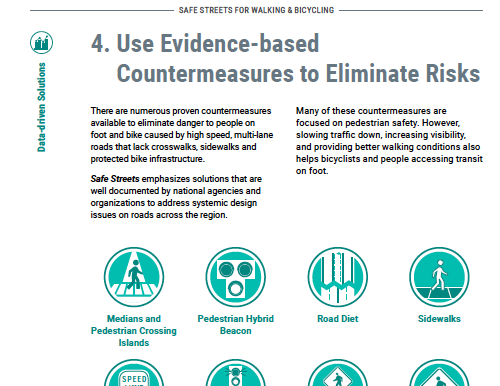 Using a complete streets conversion or road diet will also make the street safer for people walking, biking, and driving. Rearranging the number lanes to add an on-street bike lanes is proven safety countermeasure. It slows speeds (with little or no effect on travel time). It reduces serious crashes.

BikeAthens fully supports the permanent installation of an on-street bike path on Barnett Shoals. At the very least–the absolute minimum–the Mayor and Commission should give the project a 30-day tryout to assuage the concerns of car commuters and fully vet the project. It is time to put people first. It is time to value safety over speed. It is time to say yes. 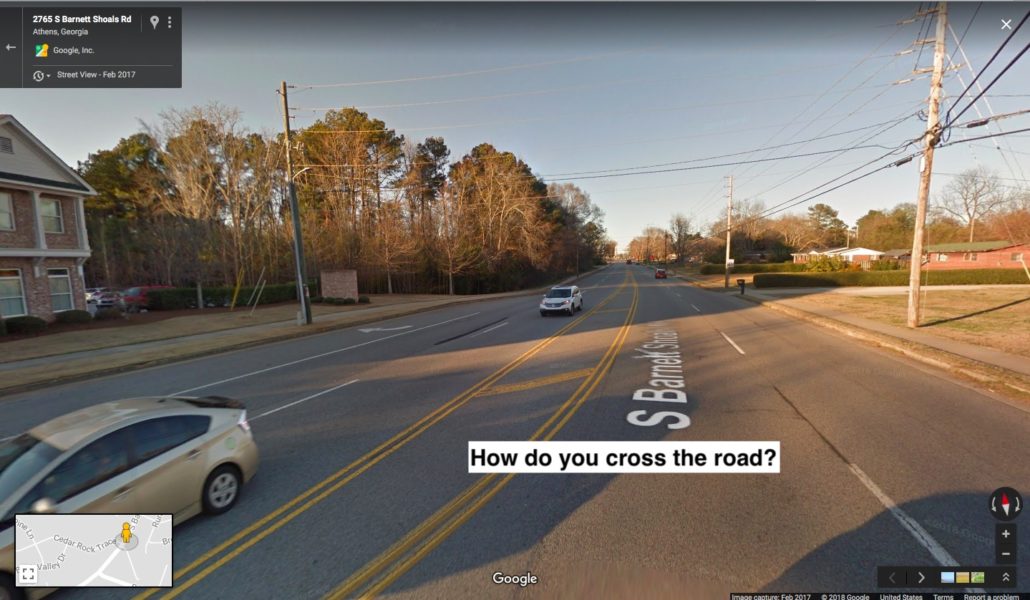