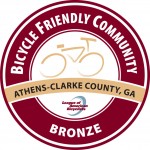 Athens-Clarke County recently received a Bicycle Friendly Community (BFC) designation from the League of American Bicyclists. In the latest round of BFC awards, kicking off May as National Bike Month, there were 45 new applicants with 21 communities receiving awards. With the cooperation from local non-profit BikeAthens, Athens-Clarke County Unified Government made its first application for BFC status in February of this year. Athens will join Tybee Island, also first time recipient, and Roswell, to become one of only three designated Bicycle Friendly Communities in Georgia.

The BFC program provides incentives, hands-on assistance, and award recognition for communities that actively support bicycling. The rigorous BFC application is an audit of the engineering, education, encouragement, enforcement and evaluation efforts in a municipality. Every community that applies receives feedback on how to improve the community for cycling. BFC staff will continue to work with awardees to encourage continual improvements. After review, an award of platinum, gold, silver or bronze status is designated for four years. Athens-Clarke County was selected as a Bicycle Friendly Community at the bronze level, recognizing a strong commitment to cycling, responsive to the needs of cyclists, and with bicycle usage above average for U.S. communities. When it is time to reapply for BFC status, Athens-Clarke County will have the chance to become the first silver, gold or platinum community in Georgia.

Athens-Clarke County is home to 18 miles of bike lanes, 6 miles of multi-use paths, and 54 miles of “shared road,” building an average of two miles per year. Bike racks are required to be installed at all new businesses which add to the nearly 4,000 existing bicycle parking spaces, making bike parking accessible all over town. Upcoming projects include construction of the Milledge Avenue Extension Multi-Use Trail, a 1,500 feet path connecting Milledge Avenue to the UGA campus, design of the 1st mile of the Rails-to-Trails program, and design and construction of bike lanes on both sides of College Station Road between Research Drive and Barnett Shoals Road, completing connectivity between East Athens, UGA, and downtown. Athens-Clarke County is also home to BikeAthens, a non-profit that has been spearheading bicycle education efforts since 1992. The BFC program recognizes communities that promote bicycling and provides technical assistance in the form of a roadmap to help cities build great communities for bicycling. The League identifies projects, policies, programs and plans that most effectively improve cycling conditions and make up the foundation of a bicycle-friendly community. To date, the League of American Bicyclists has received 452 applications and designated 179 Bicycle Friendly Communities in 44 states. Athens-Clarke County is proud to join the ranks of these other communities and will continue to strive to maintain its status as a Bicycle Friendly Community.