News
You are here: Home1 / News2 / News3 / Advocacy4 / A Plan for Better Biking and Walking in ACC

Note: this article is an updated and revised version of a Feb. 2016 post about The Many Benefits of a New Bike Plan.

Athens-Clarke County adopted their first and only bike master plan (BMP) in 2001. The 2001 BMP designated 16 routes that would create a web of connected bike routes, with a focus on the areas around downtown. With a new Bike and Pedestrian Master Plan (which we will call the Bike-Walk Plan or the BPMP) planning process around the corner, let’s examine the benefits of a new plan. The fresh approach will introduce a host of improvements: a clearer philosophical approach; best-practice designs; low-cost solutions; and perhaps most importantly, an updated list of community-approved priorities (which we will work to ensure reflects the needs of all Athenians).

First, the new Bike-Walk Plan will have a simple, effective, and easy-to-understand design philosophy. Toole Design Group is looking to create a Low Stress (PDF) Network. As the name suggests, Low-Stress planning will identify and create places to ride that are as stress-free as possible. Riding on a high-speed, high traffic road is tense. Riding on the Greenway is relaxing. More of our streets can and should feel like the Greenway. Many neighborhood streets are already low-stress. The BPMP will work to more clearly identify those low-stress streets. The plan will also work to lower the stress level on streets that are not comfortable for people walking and biking.

The BPMP will relax high-stress streets, in part, through better design. When the 2001 BMP was adopted, the main bike-infrastructure design guide was the 1999 American Association of State Highway Transportation Officials (AASHTO) Guide for the Development of Bicycles Facilities (PDF). The recommendations found in the guide—wide outside lanes, discouragement of protected bike lanes, avoidance of green, high-vis markings—have since been superseded by the 2012 update of the AASHTO Guide (PDF).

Bike planning and design has undergone a sea change in the last 15 years. The Federal Highway Administration, for example, now endorses the North American City Transportation Officials Urban Bikeway Design Guide. The NACTO guide provides design guidance for the types of bike lanes that lead to measurable increases in the number of people biking, with a reduction in crashes. Want to build a protected bike lane, bike boulevard, or a bike box? Look to NACTO. The new Bike-Walk Plan will use these designs in ACC. Indeed, Transportation & Public Works has already starting using some of these ideas on our streets. 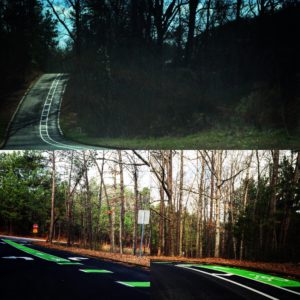 The 2001 BMP presented improvement recommendations for 16 routes. Because it was developed before the revolution in low-cost bike lane designs, the recommendations relied heavily on expensive “major reconstruction.” Faced with the extreme costs of widening multiple streets, the ’01 BMP often relied on signs and “sharrows.” (Signs & Sharrows are not bike lanes and they may not improve the safety of the street.) Cities around Georgia are making quick progress on their bike projects by taking advantage of low-cost opportunities to add bike lanes within the existing right of way. Athens new Bike-Walk Plan will look for these important, inexpensive opportunities. Creating more space within existing right of way keeps costs down; and it can also speed up the timetable for implementing the community vision.

Importantly, the new BPMP will create a new method to prioritize projects. At the moment, we have no objective method for choosing where to put the next bike lane; where to put the next protected bike lane. Toole will work with the community to create a new list of priorities for where we want to start building new and improved streets for biking and walking. The BPMP will also go the next step and track progress to ensure the plan is implemented. Too many ACC plans and studies sit on the shelf. With community input and support the Bike-Walk Plan will become a reality. The on-paper projects will turn into real bike lanes. The ultimate goal: a safe, equitable, and efficient bike network that provides true transportation choices for all of us.